Whatever you call it, Morocco is a sensory overload.

Laura and I are waiting around in Marakesh for a bus that leaves in a little over an hour. We’re traveling today to a small town on the edge of the Sahara desert called M’Hamid. We hope to hire a guide to take us on a camel trek out to some large sand dunes called Erg Chigaga.

Blogging will be sporadic for the next two days, and since I set this post to publish a few days after I’m writing it, by the time you read it we will already be among the dunes.

Morocco has been very interesting, and in many ways the most challenging country we’ve visited to date. Marakesh left a slightly sour taste in our mouths after traveling in hassle free places for so long. Everyone seems out to get a piece of your dirhams or Euros. Partly this is just a mental thing for us, readjusting to life on the road, but partly it seems like something inate about the place too. It is Muslim, yet western, old, but new, the playground of wealthy Europeans, package tourists, and backpackers alike. The winding streets and back alleys (called derbs) of the old town, or Medina, are full of shopkeepers, touts and beggars of every kind. It is a haven for people photography, but the people are absolutely hostile to photographs. I can’t say I blame them, either, with the number of visitors this place must receive on a daily basis, having a camera pointed at your day to day life must get pretty old.

The heat has been a nice improvement, sometimes reaching 30 degrees, although it has been cool in the evenings.

Anyway, I don’t have time for much more than this quick update and a few shots from the past couple of weeks. When we’re clear of Morocco, we should have more time for updates. 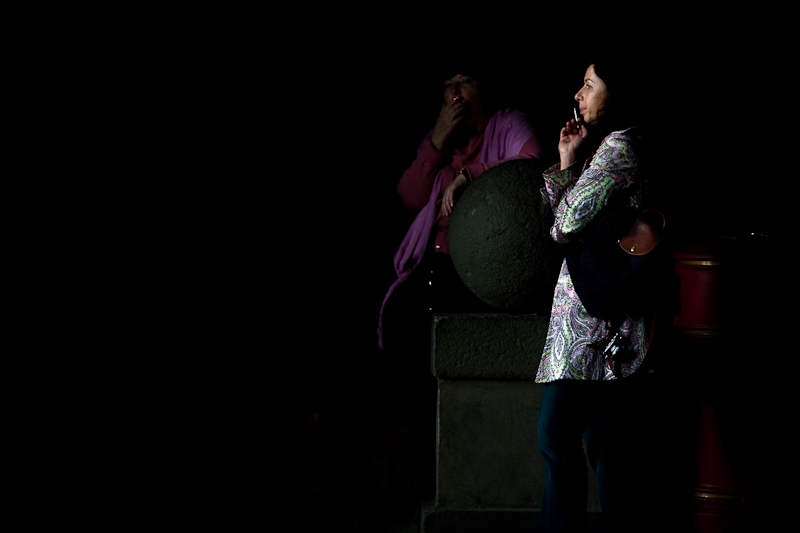 The peaker. Parma, Italy. We took a day trip into Parma (where Parmagianno cheese originates) with Christine. It was only about an hour train ride from Piacenza. Although it was raining the whole time, we enjoyed it.

Laura and I had a day in Milan, before spending the night sleeping in Malpensa airport before catching our flight to Morocco. This is the Milan Duomo (cathedral), the largest church I have ever been in.

Our first stop in Marocco was a small seaside town called El Jadida. This is the Portuguese cistern in the Medina, or old town.

After El Jadida, we visited Essaouira (pronounced "Essa-weera"). It was also very laid-back, especially when compared with Marakesh.

The Djemma el-Fna is the heart of Marakesh's ancient Medina. Stragglers, hagglers, and every manner of bedragglers haunt the place, eager to score a few dirhams from the scores of visitors. Wealth inequality is a big issue here, where average salaries for working class jobs are only about $10 CDN per day.

p.s. – to all the Mom’s out there, including our own (as well as my sister Kelli, and our friend Des!), Happy belated Mothers’ Day! We put some cards in the mail for our own special Moms from Italy, but were unable to get to Internet on the big day itself. Love you!