Chris in front of the Trojan Horse from Brad Pitts movie, Troy. It is the closest Chris or I will ever be to Brad Pitt. This monumental horse is found in Canakkale, Turkey.

On the way to the site the clouds didn’t hold much hope for us as they blocked the sky and quickly made puddles in the street. The dolmus continued to bump and turn on the winding streets. Some other tourists spoke loudy in the front. We couldn’t understand them. We only knew it was taxing to be forced to listen.

The Â clouds parted just as the dolmus stopped at the long walkway leading up the site of Troy. Wonderful, we thought.

30.00 Turkish Lira ($20.00 Â CAN) later we found ourselves standing at the base of another wooden horse. Unfortunately Brad Pitt never touched this one, but you can go inside! So of course being Â me, I did. Chris on the other hand decided to climb the walls of Troy.

Chris climbing one of the major walls at Troy. Don't worry this is as high as he went. The site is located 30-minutes away from Canakkale, Turkey.

For us, the road to Troy started at the Archaeological Museum in Istanbul. The museum contains artefacts from archaeological digs from all over Turkey. Almost one entire wing is dedicated to the artefacts found at Troy. The collection is sorted and displayed depending upon which Troy it came from. Â The site was actually inhabited many times, leading to a succession of seven sites built on top of each other. Like most archaeological sites, not much remains except for the stone foundations of buildings and remaints of fortifying walls. The site has been excavated of all its treasures which are now housed in different countries. However, a very comprehensive collection of pottery, tools and elaborate jewelley can be seen at the Archaeological Museum in Istanbul. Many of the items on display were found by Heinrich Schliemann, otherwise known as the Father of Archaeology. 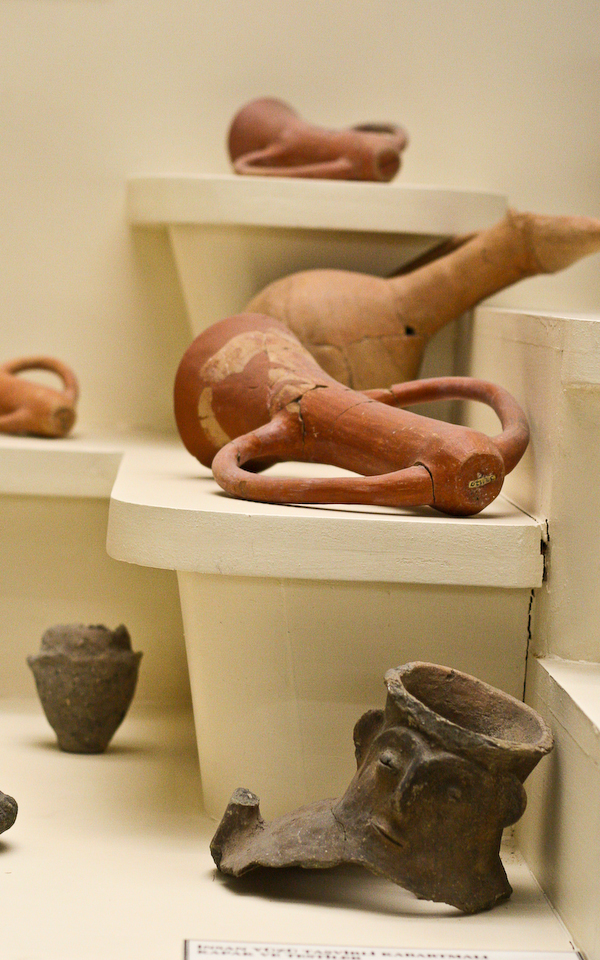 I found this humanized vase very amusing. Found in the Archaeological Museum in Istanbul.Â

According to the description of this artefact, this vase resembles a woman. I love the life and playfulness Â of it. Found in the Archaeological Museum in Istanbul.Â

Ear rings that resemble the ones worn by Heinrich Schliemann's wife in photographs. Found in the Archaeological Museum in Istanbul.

The gold work of Troy, found by Schliemann. Found in the Archaeological Museum in Istanbul.

Unfortunately, being the Father of Archaeology doesn’t mean he had the perfect technique. It simply means that he was the first person who wasn’t purly a treasure hunter, but who actually had some curiousity and interest in the place, the people and the history.

We met a tourist who firmly believed seeing the site of Troy wasn’t worth it because it was just a pile of rocks and that there isn’t much there anyway. I find this attitude and statement can easily be applied to most, if not all, of the ancient sites in Turkey. Not only were rocks an ancient building material, they still are today and if you dig a hole in the soil you will get 85% rock. Rocks are everywhere (just like cats and roosters). It’s not about the rocks. It’s what people did with the rocks and how the rocks explain the human story. I won’t deny that visiting site after site takes more patience and energy each time. It becomes harder and harder to imagine the theatre bursting with entertainment or the house walls continuing to show elaborate frescos protected by a wood roof. Â I think about the time and effort of the people who built it, who depended on it day after day. It’s the least I can do. When I was younger I never liked history. I think it was because I never imagined the people, doing everyday tasks and having human emotions. As a young teenager history meant memorizing dates, timelines and names. History didn’t have a heart or personality. It was like looking at a rock and expecting it to do something, instead of looking at the rock in relation to the objects around it and the placement of the rock. But alas, enough of my rock metaphor of history.

The very famous ramp found at Troy. This would have been the main gateway into the city. Imagine the walls continuing upward with huge wood doors and to the left of the gate, a temporary store constructed out of cloth and wood.

Look for the ramp and walls in this diagram and then examine the photo of what is actually left today.

Here you can see the outer wall and in the upper left-hand side of the photo, the foundations of a gate.

This diagram shows the complexity of the site. You can clearly see how one city was built on top of the last. Look closely for the Roman numerals assigned to the different layers. Then, look at the next photo of the actual site. Having a degree in Archaeology, and knowing a little about excavations, I don't envy those who were responsible for analyzing it, especially with the magnitude of its world fame.

An excellent representation of the complexity of excavating the site of Troy.

After two hours with Troy practically to our selves Chris and I made our way back to Canakkale on the bumpy dolmus. It wove in and out of small towns, roosters and olive trees. Looking back over my shoulder I tried deparately to get one last glimps of the site. It quickly disappearred behind the surounding hills. All that I could spot was the Â reflextion of the six clean, white 52-passenger Turkish tourist buses. Perfect timimg, I thought.

For those of you who haven’t been, Troy is worth visiting – if you don’t mind interpreting the rocks.