The Turkish Bath Towel Was Too Small

Which one should we go to? This one costs double the price, so is it better, or is it just more because it is physically one of the oldest Turkish baths? There are so many questions when it comes to Turkish baths, or Hamams, for us Canadians who are very used to wearing lots and lots of layers of clothing.

The Lonely Planet Turkey travel guide suggests three in Istanbul: the Cagaloglu Hamami, the Cemberlitas Hamami and the Yesildirek Hamami. The first two range from 80-100 Turkish Lira for the full Turkish bath experience, which is a steam room, a bathing and a massage. The third, Yesildirek Hamami, is a gay hamami which costs 30 Turkish Lira. A staff member at our hostel suggested we go to one called Sultanahmet Hamami which only costs 40 Turkish Lira for the full-deal. It’s also just up the main street from the Blue Mosque and Aya Sophia which is very close to our hostel.

Only seconds after entering the door and seeing a white guy sitting in nothing more then two towels in the main foyer, Chris and I were ushered into a narrow change room, together. “Take off clothes. Hang there. Put on towel.” the man simply said has he pointed and then shook one of the thin, red plaid towels. We had both brought our bathing suits and towel not knowing what to expect. Leaving our swimming suits behind we proceeded to only wrap the thin towels around ourselves. But the Turkish bath towel was too small! So, I wrapped my own towel around my waist and their towel around my top. Perfect, problem solved.

We stepped out of the change room. Immediately a large serious looking man grunted in disapproval and one of the women started to shake her head and wave her hands. “No, no, no”, she said, as she tugged on my bottom towel. “Um, it’s too short.” I said. Within seconds I was taken to a closet full of more thin, plaid towels. My fingers had barely grasped it when a second lady ushered me towards a low wooden door. “Lady, come.” I followed her, glancing over my shoulder at Chris, not knowing what was happening or where he’d be taken.

I ducked through the door, through a little hall, then another door just in time to see my guide disappear behind a door that read, ‘MEN’. I hesitated. Being specifically told before coming to the bath that it was segregated, men and women, I wasn’t so sure I should follow. My guide stuck her head back out the door, “Lady, come.”

Just before my glasses completely fogged-up from the humidity, I managed to see there were no men in the room. In the center of the room was a large, flat marble slab about 2-feet high. She patted it at the same time the door swung open and Chris came in. We laid down, belly up, side-by-side on the warm marble. Relaxed, we looked up at the spiral-dome shaped ceiling and the many sinks within the room. Singing echoed through the bath. It grew louder until the door opened and like an ear drum clearing from a flight, the singing was loud and clear has the man walked around us. He ushered for Chris to sit on the floor by one of the sinks and started dumping water on Chris’s head with a bowl.

The door swung open, “Lady come.” After ducking through two low-framed doors she stopped, turned to me and tugged on my towel. “Oh sure,” I thought “Why the hell not?” I let her grab my towel, which left me butt naked in the humidity of the Turkish bath. We walked down a short tunnel-like hallway into a private chamber. In the center was a marble bed with two sinks behind it. She put my towel on the marble and mimed for me to lay belly down. She left the room and came back in nothing else then her black panties. “Um?”, I thought, “She’s a lot thinner and younger then the lady I remember when I went to a Turkish bath in 1999 when I visited Turkey with my parents and two friends. Only that time I wore my bathing suit and there were no private chambers.”

She pored hot water all over me, took something that looked like a giant pillowcase, swung it back and forth a few times and then squeezed it over top of me. Mounds of soft, white bubbles heaped on top of my body almost a foot high. After rubbing my legs and arms with her bare hands, she tied a scrub pad onto her hand and managed to remove all my dead skin, plus a couple of layers of live skin on my shoulders. The process continued to the other side ending with bowl after bowl of water being dumped on me before she gave my towel back and ushered me back into the men’s chamber. Chris and I looked at each other and back up at the spiral dome-shaped ceiling as we relaxed, yet again, on the hot marble floor.

The most difficult part of the Turkish bath experience was peeling ourselves off the marble to leave. The most enjoyable, besides absolute relaxation, was seeing the expressions and uneasiness of the fresh tourists entering the bath. I found their conservative body language interesting because outside the bath house they might view Turkey as conservative relative to their country, but inside the bath house they were the conservative ones. Lastly, just has a heads-up, it is common for bath houses to mix tourists instead of segregating them.

This is an experience that definitely should not be missed, and one that we fully intend on doing throughout Turkey. 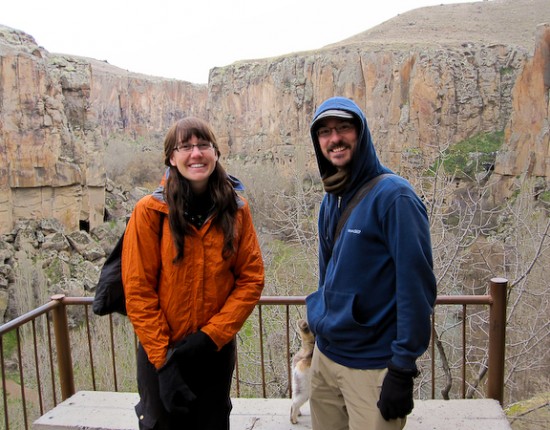 The 50-millimeter Canon lens bounced down the Ihlara Valley